The port of Tenerife in the Canary Islands (Spain) is the gateway to lots of interesting and diverse sites close the port.

There are also many things to do for cruise visitors who enjoy exploring sites and attractions close to the port. The island capital, Santa Cruz de Tenerife, is within walking distance and there a few sightseeing services available.

Tenerife is one of the most visited cruise port of call in the South European Atlantic itineraries during the Spring-Summer season, with as many as 1 million passengers and over 500 cruise ship visits in 2019.

The cruise port of Tenerife has a pleasant ambiance, is very tidy and well kept. By and large, Tenerife is safe. The local population is friendly, agreeable, well-mannered, and speaks English very well.

For those cruising with families, there are quite a few things to do. Cruise passengers with disabilities or with walking difficulties will find it simple to wander around in Tenerife on their own.

Where is Tenerife and the cruise port

Tenerife is 195 miles (314 km) west of the coast of Morrocco (Africa) and 295 miles south of Funchal (Madeira, Portugal), another major cruise port in the Southern European Atlantic region. The cruise port is very close to the city center of Santa Cruz de Tenerife.

Ships dock on a medium-sized mixed port with a long breakwater officially named Muelle Sur, where up to 5 cruise ships dock. You can walk along the breakwater to a welcome center and a terminal building farther away - between ¾ of a mile and 1 mile (1km and 1.6 km).

► Explore: The Pier and Cruise Terminal in Santa Cruz de Tenerife
Find out where to get a taxi at the pier, the shops at the covered welcome center, the amenities and services in the cruise terminal and more ...
Read the full review ►

How to explore Tenerife on a cruise

Cruise or shore excursions are advisable to explore farther away attractions like the El Teide volcano or La Laguna, the old capital of Tenerife. For those that enjoy walking, the highlights of the historical city are easy to explore on your (on foot).

If you want to enjoy one of the many and beautiful beaches, Playa de Las Teresitas is just 5.9 miles (9.6km) north of the city. There is a direct bus to Las Teresitas with a stop by the terminal's exit. However, the most famous beach of Tenerife, Playa De Las Américas, is around 48 miles (78km) south of the port (we recommend a shore excursion).

There are two different sightseeing hop-on hop-off buses in Tenerife and a Choo-Choo tourist train. There are taxis right outside the gangway and on the main square (Plaza de España) next to the cruise terminal exit to your left. Abridging, these are the best ways for cruise visitors to discover Tenerife:

Cruise passengers that enjoy sightseeing services will find hop-on-hop-off buses starting a stone's throw from the cruise port terminal on Plaza de España. Here you will also find the stop of the Choo-Choo Train. Click on the links below to check schedules and prices.

Tenerife top attraction is the Teide National Park, but the Anaga Rural Park is also quite interesting for those that enjoy nature gazing. The shows in Loro Park are great for cruise passengers with young ones.

If you appreciate quaint landmarks, historical towns like La Laguna, La Orotava, and Puerto de la Cruz are delightful. Las Teresitas, El Médano and Playa de las Américas are the three most famous beaches in Tenerife. Here are the top attractions in Tenerife. Click on "Learn More ..." to read a full review.

The historical center of Santa Cruz de Tenerife is within walking distance of the cruise port, no more than a 5-minute walk. Unless you are booked on a full-day shore excursion, meandering the city on foot is a pleasure not to be missed.

Attractions in the city of Santa Cruz

Here are the top attractions, sites, and landmarks cruise visitors can enjoy on foot or with sightseeing services in the city Santa Cruz:

► Explore: What To Do On Your Own in Tenerife.
What's close by and within walking distance. What to explore on foot and with sightseeing services.
Read the full review ►

Celebrity Cruises offer as many 14 tours, and Princess has available x10excursions in Tenerife cruise port.

The large european fleets of Costa and Aida sail the Canary Island all year round offering great excursions in Tenerife. Costa lists 15 tours.

As previously mentioned, cruise passengers will not miss the tourism office kiosk by the exit of the terminal. If walking to town, you will see another tourist info kiosk but, be aware, this is not a representation of the offcial local tourism. The main office of the tourism office is at the southern end of Plaza de España, right by the unamissable round lake.

Castilian Spanish is the most common language in Tenerife, but English is widely spoken in all major touristic areas.

Museums in Spain are open with different schedules. Some museums open Tuesday to Saturday from 9 am to 8 pm, while others are open between 10 am and 5 pm. Be aware that all museums in Spain close on Mondays. Banks are open Monday to Friday from 8:30 am to 2 pm.

Most shops are open on weekdays, and Saturdays, from 8:30 am to 8 pm. However, smaller stores and boutiques may close for lunch (and “siesta” ) between 2 pm and 5 pm. Most shops close on Sunday except for shopping malls, which open seven days a week and on most holidays from 10 am to 11 pm.

Safety, US travel advisory, and basics

For comprehensive and updated information about traveling to Spain see the U.S. Department of State website page evolving advisory.

For updated coronavirus (Covid-19) information and travel advice to Spain and Tenerife visit the website of the U.S. Embassy in Spain. For more Traveler's Health advice to Spain see the CDC Website.

Tenerife Basic Info at a Glance

Tenerife is on Central European Time (CET), 1 hour ahead of Coordinated Universal Time (UTC). Spain and Tenerife observe daylight saving time/summer time during the summer and therefore use CEST (Central European Summer Time), which is 2 hours ahead of Coordinated Universal Time (UTC). Daylight saving time begins on last Sunday in March, and ends on last Sunday in October. 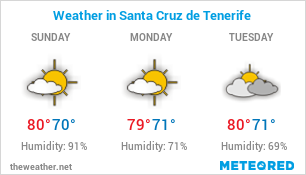 The Euro (€) (EUR) is the legal tender in Spain as a full member of the European and Monetary Union. US$ dollars or any other currency are NOT accepted and you must have Euros to pay for services or purchases in cash.

Most credit cards are accepted in all tourist sites and venues, as well as in shops and restaurants. Very few taxis accept credit cards.

There are ATMs by all banks, in shopping malls, or next to supermarkets, where you can cash Euros with both your debit card and credit card. ATMs in Spain are usually labeled Telebanco or Cajero.

You are not supposed to haggle on any shops or services except when dealing with street vendors. Be aware that most street vendors are not legal, and you can get your purchases confiscated.

Many attractions, museums and shops may be closed on the dates below. Transportation services will be less frequent.

The Heart of Tenerife
theheartoftenerife.com

Discover other reviews and port guides near Tenerife, and in the Mediterranean.

The information on this page was accurate when last updated and published but changes may have occurred without notice.
It is advisable to confirm details with local tourist information before planning your cruise, tour or excursion of Tenerife Cruise Port.
If any inaccuracies are found or if there are any suggestions to improve the content of this page please let us know.