Must-visit museums and artworks in Volterra to explore on your own, or on a shore excursion on a cruise to Livorno cruise port

Cruise visitors traveling from the Port of Livorno to Volterra, either on a cruise excursion or on their own, should not miss the opportunity to visit the excellent museums in Volterra.

The Museo Etrusco Guarnacci was founded in 1761 when Mario Guarnacci donated his collection of artifacts and library of over 50,000 volumes to “the citizens of the city of Volterra.”

Although filled with Etruscan artifacts – particularly funerary urns – dating back to Hellenistic and Archaic times, the main attractions of the Museo Etrusco Guarnacci are a bronze statuette called “Shadow of the Night,” a terracotta effigy of an Etruscan couple, and the funeral stele of Avile Tite.

The Museo d’Arte Sacra was established by the Canon Maurizio Cavallini and officially opened its doors on December 20, 1932. Although it has always been a public museum, it was closed from 1944 until 1956 due to damaged sustained during World War II. It was also closed in the early 1990s for restorations.

Housed in the Bishop’s Palace, the Sacred Art Museum is a collection of artistic works from the cathedral and churches of the Volterra diocese. The most notable pieces are holy vestments, ecclesiastical furnishings, gold reliquaries, wooden and fictile sculptures, and the only remaining 14th-century marble sculptures from the Cathedral. The works by Rosso Fiorentino and Andrea Della Robbia are also remarkably impressive.

Pinacotheca and Civic Museum in Volterra

Although the Cathedral worker Luigi Fedra Inghirami began collecting the works of art that are now housed in the Pinacoteca e Museo Civico in as early as 1842, it was Corrado Ricci - Superintendent of Antiquities and Fine Arts - who proposed turning the collection into a municipal art gallery.

Vergine in Trono by Luca Signorelli

The collection was transferred to the Palazzo dei Priori in 1905 before it was moved to its current and stunning location. Although not a large gallery, the Pinacoteca e Museo Civico houses some of the best works by Volterran artists who lived in the city between the 12th and 17th centuries. These artists include Rosso Fiorentino, Taddeo di Bartolo, Cenni di Francesco, Alvaro Pirez, Francesco Neri and Benvenuto di Giovanni. The collection also includes work by sculptors Francesco di Valdambrino, Domenico Ghirlandaio and Luca Signorelli.

The Ecomuseo dell’Alabastro is an art museum that shares space with the Pinacotheca in a former 17th century Augustinian convent.

A private collection assembled by the Bruchi family over the course of 30 years, it includes paintings, antiques, and ceramics. The museum is most well-known, however, for its collection of alabaster works. Contemporary works are found on the ground floor, while the upper floors house beautiful Etruscan pieces that include cameos by Luigi Albino Funaioli and busts by Giuseppe Bessi.

The Palazzo dei Priori was designed by Richard of Como and built between 1208 and 1254. Tuscany’s first town hall, the Palazzo is believed to have served as a model for Florence’s Palazzo Vecchio. Although it has been altered quite a few times over the centuries, visitors can appreciate what still remains of the Palazzo dei Priori’s distinctive facade, five-sided tower, and crenelations. The Palazzo’s Sala del Consiglio, where Volterra’s leaders still meet, is open to the public along with the rest of the building.

The Palazzo Incontri-Viti is considered one of the most beautiful private residences in Italy. It was built in the last 16th century for Attilio Incontri, the minister to the Grand Duke of Tuscany. As it has changed hands over the years, the Palazzo has undergone a variety of renovations – including the addition of a theatre on the ground floor. In 1964, Luchino Visconti used the Palazzo Incontri-Viti as a set while filming 'Vaghe Stelle dell’Orso', which won the Leone d'Oro at the Venice film festival.

How long does it take to explore the museums in Volterra?
Although the collections displayed in the museums of Volterra are worth exploring, these are not very large and in a couple of hours the visitor will have an opportunity to see the most interesting works on display. 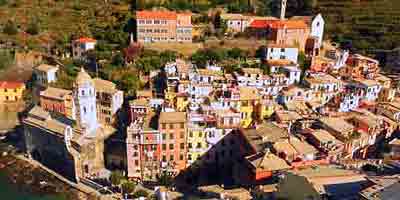